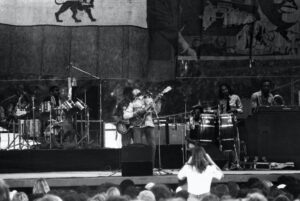 Julian Marley has been announced as the headline act for this year’s Roots Rock Reggae Festival in Gibraltar. The UK-born son of legendary Jamaican reggae artist Bob Marley, the musician, songwriter and producer will be accompanied by the band Uprising.

They are expected to perform songs from his fourth and most recent album, “As I Am”, which was nominated for best reggae album in the 2020 Grammy Awards.

The festival is scheduled to be held on Friday 29 July.

Pictured: Bob Marley in concert in New Zealand in 1979 – Photo by Bill Fairs on Unsplash