An exhibition commemorating Gibraltar’s “first step to self-government” will remain on show until 17 December. Hosted by Gibraltar National Archives and inaugurated today by deputy chief minister Dr Joseph Garcia, at the Mario Finlayson National Art Gallery, the exhibition marks 100 years since the City Council was established, with the first meeting held on 1 December 1921.

The aims of the exhibition, according to the government, are to introduce the municipal institution to younger generations, highlighting how in 1921, for the first time in local history, Gibraltarians had the opportunity to elect their council representatives. “Secondly, the exhibition aims to honour and remember the protagonists – the councillors selected or appointed, the faithful hardworking staff and many others that supported the council in its 48 years of existence.”

Comprising a total of 243 captioned, dated and numbered images, as well as murals and a council timeline, it is divided into 11 sections: Forerunners, Creation & Premises, Elections, Personalities, Responsibilities, Suspension, Housing, Leisure, Freedom of the City, Concepts and Abolition. 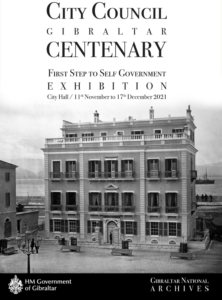 During his opening address, Dr Garcia gave a comprehensive outline of the City Council’s origins and evolution over the years…

“The road to self-government was never a smooth one for Gibraltar. Because we were in many ways unique. A small territory of a global empire, a strategic military fortress and staging post, but also a civil colony, and all this rolled into one. And sometimes the interests of the military and the interests of the civilian population were not the same. So every step we took in the direction of greater self-government was subject, not just to the scrutiny of the armed forces, but also to their explicit approval.

“For decades, this stymied the political evolution of the Gibraltarians. As Tommy Finlayson so aptly put it, ‘The Fortress came First’. It was not wholly unexpected, therefore, that the main steps along that rocky road to self-government followed the two major conflicts that humanity has known. The establishment of a City Council in 1921 was a direct consequence of the First World War. Its re-establishment in 1945, along with a Legislative Council a few years later, a  direct consequence of the Second.

“Gibraltar played an important role during World War I. It was a crucial assembly point for Allied convoys. They gathered here and sailed east into the Mediterranean, they went west into the Atlantic, also to and from the United Kingdom itself. And when the war was over there was a genuine desire to reward Gibraltar and its people for their contribution to the cause. A desire to reform and to modernise. Gibraltar is a Victorian Museum piece, wrote a senior UK official many years later, and it is high time a fresh wind blew through it.

“But this sentiment was coupled with certain apprehension as to the consequences that any devolution of power might bring. The creation of a City Council in 1921 reflected this attitude. It was indeed the first step in the direction of self-government but it was a small and cautious step forward. The council, for example, was established with an in-built majority of five appointed officials over four members elected by male ratepayers only. Those officials often included the different branches of the armed services, whose representatives took their seats in full uniform each guarding their own patch from the other, but also from encroachment by the Gibraltarian elite. The council’s powers were essentially those previously exercised by the Sanitary Commission that it replaced. It took over their staff and their premises. 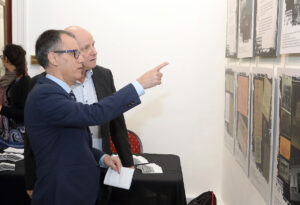 “The new body would continue to be presided over by a chairman as opposed to a mayor. This was then, in certain important respects, a City Council a la carte. It reflected the delicate balance of competing interests which was then a hallmark of political life in Gibraltar. However, its establishment was nonetheless an important landmark in that political and constitutional development of Gibraltar. It set the scene for what was to come later. In particular, demands for an elected majority on the City Council – which was achieved after World War II, during which it had been suspended.

“Students of the modern history of the Gibraltarians will understand that in institutional terms this was where the journey of our political representation as a people actually began. The council’s powers were extended over the years. Our forefathers, unsurprisingly, pushed to accumulate more and more responsibility in the body that they came to control after 1945. James Andrews-Speed was its first chairman in 1921. The office of mayor eventually replaced that of chairman. In 1955, Sir Joshua Hassan became its first mayor. The council went on to exercise its functions until 1969. It was then merged with the Legislative Council to form the Gibraltar House of Assembly. The exhibits around us tell this fascinating story.”

Noting that the government was delighted when archivist Anthony Pitaluga proposed an exhibition to commemorate the centenary of the establishment of the City Council, Dr Garcia thanked Pitaluga, his team at the National Archives and the many volunteers and contributors who had come forward to make this a reality. 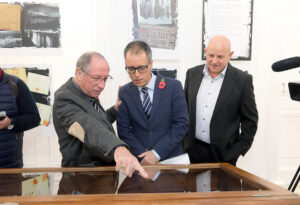 He also thanked the minister for culture and the mayor for facilitating the use of the exhibition venue. “I found it pertinent to learn that the original home of the City Council was actually in Convent Place, in premises which were inherited from the Sanitary Commissioners. Today, it is wonderful to see the exhibition housed in this building. The very location where the meetings and deliberations of that council took place during most of its existence. I encourage the public to come and take a look.”

Gibraltar City Hall was the Council’s seat from 1924, with meetings held there until 1969 when it merged with the Legislative Council to form the Gibraltar House of Assembly. Today, the City Hall houses the offices of Gibraltar’s mayor and the Mario Finlayson National Art Gallery.

The Gibraltar government has issued a commemorative stamp to mark the 100th anniversary of the establishment of the City Council.

The stamp features a painting of the City Hall by Gibraltarian artist, and winner of this year’s Spring Visual Arts Competition, Leslie Gaduzo. The design and related philatelic products were produced by local graphic designer Stephen Perera.

The stamps have been printed on high-quality gummed paper by security printers in Belgium and are available for purchase online at www.gibraltar-stamps.com or from the Philatelic Shop located at 104 Main Street.

Another iconic piece of Gibraltarian history was officially unveiled earlier this month.