Dogged Milkins Reignites His Snooker Career in Gibraltar… and Redeems Himself

Robert Milkins clearly thrives in Gibraltar’s iconic rock atmosphere – even with the “calima”. Three weeks after sinking to one of the lowest ebbs in his career, the 46-year-old snooker veteran from Gloucester secured a remarkable victory in the BetVictor Gibraltar Open.

To recap… Milkins is facing WPBSA disciplinary action after a “drunken escapade” on the eve of the Turkish Open earlier this month when his birthday celebrations reportedly became over-exuberant.

As the WST (World Snooker Tour) noted, “That incident was perhaps the result of the pressure the father-of-three felt to turn his form around and provide money for his family.”

Fast forward to Gibraltar, where he arrived having won just three matches all season. Now, however, “one of the sport’s more naturally talented players, who is popular with his peers for his usually affable nature, can look forward to a brighter future having fulfilled at least part of his potential”.

As for the “calima” (a red Saharan dust storm that enveloped the southern Mediterranean coast last week), several players were unable to make it to Gibraltar because of 11th hour travel issues, but the field was still one one of the strongest of the year.

Not that the more favoured players were able to capitalise on their status. Ronnie O’Sullivan was knocked out in his first match, and both Neil Robertson and Judd Trump in the fourth round. In the end the last two left standing at the Europa Sports Complex venue were Milkins, nicknamed “The Milkman”, and Kyren Wilson (“The Warrior”).

Milkins, who had previously appeared in six ranking event semi-finals but never a final, raced to a three-frame lead in the best-of-seven match, had some anxious moments as Wilson clawed back to 3-2, then sealed victory 4-2 and a cheque for £50,000.

“It has been a long time coming,” said Milkins. “I have worked all my career for this; it’s a dream come true. It’s hard to keep practising and not getting the rewards, but a moment like this makes it all worth it. To be honest I didn’t think I’d ever see this day. Things haven’t been going well for me recently and I couldn’t see it coming.

“I have had times in my career where I have felt I had a chance to win tournaments, but recently I haven’t even seen myself winning a match. The standard is so good now, and next season I could have been struggling to stay on the tour. I’m glad this has happened now because I certainly haven’t got much time left! This has changed things for me.

“I love Gibraltar; it’s one of the best venues and a place to enjoy. Thank you to the fans because they have been great. I would like to dedicate this trophy to the people around me I have lost and who can’t see me here today – my mum and dad, and other people.”

Wilson was typically gracious in defeat. “This is a special moment for Rob so congratulations to him. I wasn’t there at all; I lost my cueing in the final. If I had taken the first frame I might have settled and left Rob cold, but he made a really good clearance. After that it was very twitchy. I tried to make a fight of it from 3-0.” 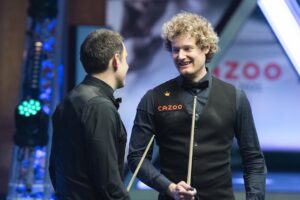 The other winner in Gibraltar was John Higgins (also 46 years old), who lost in the last 32 but still collected the £150,000 BetVictor Series bonus for topping the ranking list, as his rivals for the prize failed to overtake him.

After the Gibraltar Open, the season’s top eight players moved on to Llandudno (Wales) this week for the Cazoo Tour Championship, where Neil Robertson is defending the title he won against Ronnie O’Sullivan in last year’s final (pictured). This will be followed by the last event of the season, the Betfred World Championship in Sheffield (16 April-2 May).