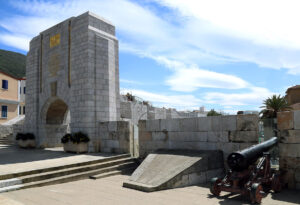 The 80th anniversary of Operation Torch is currently being commemorated with a special exhibition in Gibraltar. Inaugurated this week by deputy chief minister Joseph Garcia, the exhibition marks 80 years since the retaking of northern Africa from the Nazis, an operation that was planned and spearheaded from Gibraltar in November 1942.

The Gibraltar government had previously commemorated this key milestone of World War II in 2004 when an Operation Torch coin was minted. The coin depicts Lieutenant-General Eisenhower (commander of Operation Torch), Lieutenant-General Kenneth Anderson (responsible for the Eastern Task Force) and Major-General Patton (in charge of the Western Task Force), as a tribute to these three military commanders’ leadership qualities.

According to the government, General Eisenhower, who went on to become US President, was the first non-British person, during Operation Torch, to command Gibraltar in more than 200 years. “This Allied counter-offensive into northern Africa was meticulously planned in detail in tunnels deep inside the actual Rock itself, where Eisenhower set up his headquarters. Undoubtedly, friendships were formed between the many different nationalities involved, all united in the cause of freedom.”

Garcia thanked Gibraltar National Archives for its curation of the exhibition. “The archivist Anthony Pitaluga and his team have once more worked tirelessly to be able to present an exhibition which is a worthy commemorative tribute.”

The exhibition will remain open to the public until 23 November, at the Orange Bastion vaults next to the American War Memorial on Line Wall Road. Admission is free. 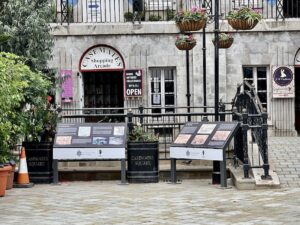 The ministry for heritage has also just announced that three new interpretation panels have been placed within the Old Town to provide information on Gibraltar’s mediaeval history, specifically the Islamic and Spanish periods.

“There has been a great deal of emphasis on the cultural and military heritage of the past 300 years,” said heritage minister John Cortes, “but our mediaeval and social heritage are as important. These panels have been placed at prime locations such as Casemates Square and the Upper Town, allowing Gibraltarians and tourists to inform themselves about some aspects of our mediaeval past.

“Highlighting our cultural heritage fosters understanding of past histories, and is not limited to archaeological discoveries. This is yet another example of the Government’s continued efforts to promote the whole of our history and heritage and to make it accessible.”

One interpretation panel at Tarik Passage (immediately adjacent to the entrance to the Old Prison) provides information about the Almond Tower, which is part of the mediaeval Moorish Castle defensive complex. The tower dates to Gibraltar’s Islamic Nasrid period, although it has been partially reconstructed on at least three occasions – and was most recently restored in 2019 by the Gibraltar National Museum.

The two interpretation panels at Casemates Square showcase one of the most ancient parts of Gibraltar city. The first panel features information on the “Atarazana”, a large galley house where ships were repaired at a port dating to 1160 (now Casemates Square). Successive occupations by the Spanish and British resulted in major changes to the built fabric of the area, and the exposed section of the mediaeval building was excavated by the Gibraltar National Museum in 1998. The second panel features what the “Atarazana” became during the Spanish period, after the conquest of Gibraltar in 1462. The galley house was abandoned with the advent of new shipping technology.

If you are travelling to Gibraltar this winter and would like to rent a car to visit the Operation Touch exhibition or enjoy other cultural activities in the lead up to Christmas, click here to take advantage of our comprehensive car hire comparison service.