In 1969 John Lennon and Yoko Ono chartered a plane and travelled to Gibraltar to get married by special licence. They went directly to the British consulate office, where (on 29 March) registrar Cecil Wheeler performed a brief wedding ceremony.

Recalling the occasion years later (in The Beatles Bible), Lennon said, “We chose Gibraltar because it is quiet, British and friendly. We tried everywhere else first. I set out to get married on the car ferry and we would have arrived in France married, but they wouldn’t do it. We were no more successful with cruise ships. We tried embassies, but three weeks’ residence in Germany or two weeks’ in France were required.

“So we were in Paris and we were calling (Apple employee) Peter Brown, and said, ‘We want to get married. Where can we go?’ And he called back and said, ‘Gibraltar’s the only place.’ So – ‘OK, let’s go!’ And we went there and it was beautiful. It’s the Pillar of Hercules, and also symbolically they called it the End of the World at one period. There’s some name besides Pillar of Hercules – but they thought the world outside was a mystery from there, so it was like the Gateway to the World. So we liked it in the symbolic sense, and the Rock foundation of our relationship.” 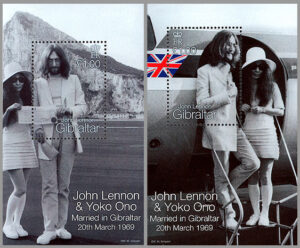 Thirty years later, Gibraltar issued postage stamps to commemorate the anniversary, with the couple pictured standing on the airport runway in front of the Rock, holding their marriage certificate.

Now, more than two decades later, the historic event has been marked with a new commemoration. Gibraltar Cultural Services, on behalf of the ministry of culture, has announced the completion of a street art mural in one of the blocked doorways in Landport Tunnel (next to Lord Nelson’s) that references the legendary musician’s trip to Gibraltar with Ono. 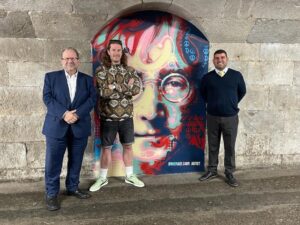 The mural was undertaken by award-winning painter and mural artist Michael Corr, who is based in central Scotland and whose work, according to the ministry, “centres around portraits, with an emphasis on colour and spontaneous mark making”. The tunnel is a key entry point for pedestrians and tourists.