It was billed as the “first fully-vaccinated event in the world”, and Gibraltarian authorities say they were pleased with how the Rumble on the Rock panned out. Staff and fans attending the seven-fight boxing event at Europa Sports Complex (670 people in all) were swabbed on the day, and also had to provide proof of full vaccination or that they had contracted COVID-19 in the last 180 days.

The reward, apart from a rare opportunity to enjoy live sport again, was being able to watch British crowd favourite Dillian Whyte beat Alexander Povetkin and regain the WBC interim heavyweight title, with the Russian’s corner team throwing in the towel in the fourth round.

Three days later, fans attended what was believed to be another world first: a fully-vaccinated international football match. Unfortunately, the result wasn’t as notable for local fans, with the Netherlands beating Gibraltar 7-0 in their World Cup qualifier at Victoria Stadium.

Spectators had to be 18 years or over, and confirm receipt of two COVID-19 vaccinations by 22 March or a COVID-19 positive result on or after 30 September. They were also required to have a negative “fast flow COVID test” result on match day, from the designated testing site at the stadium.

Later, referring to the boxing event, minister for sport Steven Linares said, “I think we can all agree that this first pilot event with spectators ran like clockwork and I would like to publicly thank Matchroom Boxing, the members of the Safety Advisory Group, all the many local companies and individuals involved and the members of my staff who played a major part in the event’s success. Not least, I would like to express my gratitude to those that attended for their excellent behaviour throughout the evening.”

As a follow-up, spectators at both events were asked to be tested again, in early April, at special Drive Thru facilities, “to help the director of public health collate crucial data”. Whyte and Povetkin signed a pair of gloves to be raffled among all those attending the test, while a Netherlands shirt signed by all the players was offered for the football fans.

“Aside from having the opportunity to win a historic bit of memorabilia,” said Steven Linares, “you will more importantly be helping to provide valuable data that will help shape the continued relaxation of restrictions.”

Added director of public health Dr Sohail Bhatti, “The Gibraltarians have been a credit to themselves with their exemplary behaviour before and during the pandemic. Now that we are leaving behind one of the darkest periods in Gibraltar’s recent history, I once again urge them to work with the department of public health to be able to collate valuable data.

“Both Saturday’s event and Tuesday’s football match are some of the first public sporting events anywhere in the world where all those in attendance have had two doses of the vaccine and have returned a negative COVID-19 test on the day of the event. We are once again pioneers and the tests on day 10 for both events are crucial in providing the information required to plan the next steps to take towards a return to normality.” 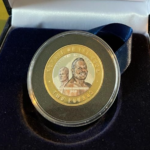 A commemorative coin has been struck to celebrate the heavyweight championship fight between Dillian Whyte and Alexander Povetkin. Featuring both boxers’ portraits, the two pound coin is the first official World Boxing Council coin released.

The launch coin was struck by Albert Poggio on behalf of the Gibraltar National Mint in London’s Tower Mint.

With the COVID-19 situation improving in Gibraltar, the government has eased curfew and other restrictions.