Also expressing his enthusiasm for the new website was Prof. John Coates, the minister with responsibility for the site, who said, “I was keen that Gorham’s Cave should have its own website and I am very pleased with the product. It is another way of bringing the site home to people, especially important these days. It is the perfect complement to the site’s existing social media pages.”

Prof. Cortes contributed the introduction to the website, which describes Gorham’s Cave Complex and its importance, and carries information about how to visit the site. “It is a site which I visited over 40 years ago in search of crag martins, birds which use the caves as a winter roost and which have done so for millennia,” he wrote.

“How wonderful that the site’s natural, as well as archaeological, values are now recognised as part of humanity’s patrimony. Its key Outstanding Universal Value relates to the use of the site by Neanderthals but its history, like much of Gibraltar’s, is not limited to our ancient relatives. Neolithic people from the fertile crescent, later Phoenicians and Greeks, Carthaginians and even Muslims in the mediaeval period stopped at these caves. 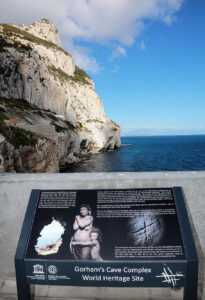 “Later still, some of the caves within the World Heritage Site were used during the Second World War, including the governor’s secret escape route from the tunnels to sea via Boat Hoist Cave.”

The Gibraltar Caves Project was established in 1989 after contact was made between the present curator and a team from the British Museum and the Natural History Museum in London. Initially, a visit was arranged to the Gorham’s Cave site, which had been partially excavated in the 1950s. The project continues today, with annual excavations by an international, multi-disciplinary team – and one result of this work was its inscription as a UNESCO World Heritage Site in 2016.

Located entirely within the Gibraltar Nature Reserve, the Gorham’s Cave Complex extends from the caves at sea level to the summit of the Rock at 426 metres above sea level. 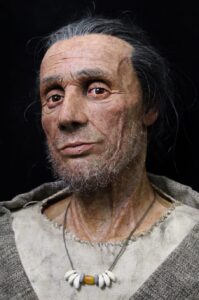 Meanwhile, a reconstruction of the head of a Bronze Age man from Gibraltar is due to go on permanent exhibition in Gibraltar National Museum this spring. The man’s cranium was excavated from Bray’s Cave on the Upper Rock by a museum team during excavations carried out between 1999 and 2006. He was one of nine individuals buried on site, with the burials dating to between 1,496 and 1,900 BCE (approximately 3,500 to 4,000 years ago).

Following the presentation of the reconstruction, Gibraltar National Museum asked members of the public to suggest a name for the man, and a team of curators and scientists reduced a list of 188 proposals to five names, which were then put to public vote on social media.

The winning name was Yantar, which means amber in Russian. According to the museum, the individual is known to have had his origins in what is today the Russian steppe – also one of the main sources of amber. When Yantar was excavated, archaeologists were reportedly intrigued to find an amber bead as part of the burial. There are no sources of amber in the western Mediterranean, with the closest being in the eastern Mediterranean, where the bead was assumed to have originated. However, genetic information related to Yantar’s origin opened up the possibility that the source of the amber was actually the Russian steppe. Gibraltar National Museum scientists say they hope further work will confirm the source.