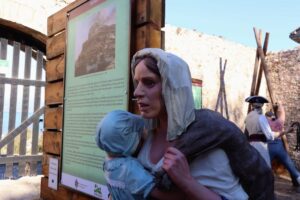 An exhibition that commemorates one of the definitive moments in Gibraltar’s history has now been fully restored. Located at Willis’ Road on the Upper Rock, the “Gibraltar: A City Under Siege Exhibition” focuses on the Gibraltarian struggle and contribution towards the war effort throughout the Great Siege of 1779-1783.

The buildings where the exhibition is housed are believed to be among the first ones ever constructed by the British in Gibraltar, dating to the beginning of the 18th century. According to the ministry for heritage, the department for the environment and the Gibraltar National Museum, who jointly completed the restoration work, “One of the most striking features of the exhibit are the graffiti markings that are abundant in all the exterior walls around the centre courtyard. The majority of the surviving graffiti date from the 1730s to the 1760s, with the oldest dated to 1726, a period in which the Garrison saw no military action and Gibraltar became a relatively easy but tedious posting for regiments serving overseas. A particularly striking graffiti is that of a two-decker ship-of-the-line sketched as she sailed majestically into the bay, etched to the left of the entrance to the main yard.” 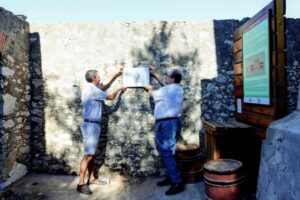 Eleven new interpretation panels have been placed, with new content, designs and illustrations, to add renewed vibrancy to the exhibition. “The panels portray how our ancestors coped during immense stress and offer insights into how the first British settlers of Gibraltar managed living in a Mediterranean fortress.”

The themes found in the panels include “Law and Order”, “Food”, “Death and Disease” and the “Gibraltarian Exodus”. The mannequins in period clothing have also been restored and enhanced, while a replica period cannon and ancillary military objects have been placed on site to improve the experience. 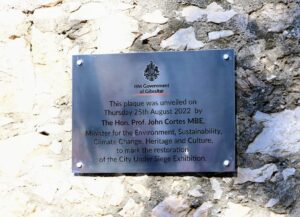 “It’s important to continue enhancing our heritage sites and the interest value of the Upper Rock,” said minister for heritage John Cortes. “This improved exhibition highlights our commitment, interest and investment in our cultural heritage. I am certain that Gibraltarians and visitors alike will enjoy the information provided and learn about the difficulties our ancestors faced during the Great Siege.”