“Rumble on the Rock” Headlines Return to International Sport in Gibraltar

Gibraltar is moving cautiously to ease lockdown restrictions, including plans to host two major international sporting events in March. Scheduled for 27 March is the heavyweight boxing rematch between Dillian Whyte and Alexander Povetkin; while three days later Gibraltar is due to play the Netherlands in a football match.

The World Snooker Tour’s Gibraltar Open will also be held from 1 to 7 March, but in Milton Keynes, which has been hosting all WST tournaments in recent months to minimise travel by players and maximise health and safety protocols.

The rematch for British heavyweight contender Dillian Whyte, who suffered a shock knockout against Russia’s Alexander Povetkin last August, was initially scheduled for 21 November 2020 but was postponed when Povetkin tested positive for COVID-19. Travel restrictions then forced the organisers to push back the rescheduled date (6 March) by three weeks.

“In the current environment we are always having to think on our feet,” said promoter Eddie Hearn. “We did everything to try and make 6 March happen, but with the new travel restrictions it was impossible. Now we have something outside the box, compelling, and a unique setting for one of the heavyweight fights of the year – roll on the Rumble on the Rock!” 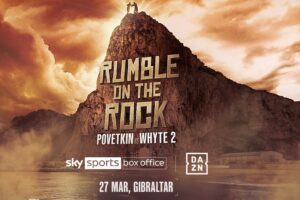 The match between Gibraltar and the Netherlands on 30 March has been designated a “pilot event”, with spectators being allowed into Victoria Stadium under strictly controlled conditions.

Director of public health Dr Sohail Bhatti said that, as this would be the first such large event since lockdown restrictions were imposed last year, there needed to be a high level of oversight with protocols in place to minimise the risk of transmission.

“This is our first major step in enjoying ourselves in larger groups. It is important that this goes well. As the match is a pilot event, we are not committing to anything long-term. I want people to enjoy themselves safely. This means a test carried out on the day as well as evidence of immunity such as past COVID infection or vaccine card. Due to UEFA restrictions, we are unclear about the eventual number of spectators. I want to encourage younger members of our community to take up the vaccine offer, as inevitably insurance companies and airlines will be implementing so-called ‘vaccine passports’.”

In an official statement referring to the two sports events, the Gibraltar government said, “As vaccination rates rise, and as we begin to move a more normal life, it is important we learn whether and how we can begin to hold larger group events. These will include sports as well as cultural events… The government is determined not to lose all the hard work that the recent lockdown has achieved, but it is also important that we gain confidence that we can hold big events in preparation for a more normal summer we can all enjoy.

“It is a large outdoor area and therefore the risk is lower… We will also be in contact with the organisers of the heavyweight boxing match about potential controlled access to their event in a COVID-secure way.”

Added chief minister Fabian Picardo, “We are working to return our community to normality. That work has to be methodical and careful. We will work with the organisers of the upcoming sporting events to see how we can develop relevant protocols that might work to ensure we can see live audiences return.”

Later addressing parliament, he said, “I want to congratulate the Gibraltar Boxing Association on behalf of the government and the whole House, no doubt, for the double achievement of admittance to the International Boxing Association and to the EUBC… This will allow the sport of boxing to flourish and develop… Together with the announcement of AIBA membership we will hopefully see the return of the glory days of Gibraltar boxing.”

Even though this year’s open championship won’t actually be held in Gibraltar, the event is officially supported by the ministry of sports and fans can watch it live (in Europe, including the UK) on Eurosport.

The 2017 champion was Shaun Murphy, who beat Judd Trump 4-2 in the final. Ryan Day succeeded him in 2018 with a 4-0 victory over Cao Yupeng, before losing against Stuart Bingham the following year (4-1). The reigning champion is current world number one Judd Trump, who beat Kyren Wilson 4-3 in the 2020 final at the Europa Sports Complex.

The 2021 BetVictor Gibraltar Open is part of the BetVictor European Series, with the winner of the order of merit across the six events earning a £150,000 bonus. Trump heads a top field including Ronnie O’Sullivan, John Higgins, Mark Selby, Neil Robertson and snooker legend Stephen Hendry, who is returning to the pro circuit after a nine-year absence.