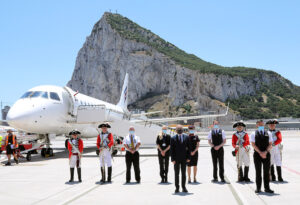 Gibraltar’s ongoing “green list” status has enabled the destination to boost its air services to an unprecedented nine UK airports this summer.

“Given that we are hopefully on the back-end of the pandemic, this is one additional service per week more than summer 2019, four more than was planned for summer 2020, and getting closer to summer 2016 and summer 2017 figures, which saw 48 services per week.”

Recapping the situation since COVID-19 radically disrupted global travel plans and schedules last March, the minister said, “A lifeline link to the UK was maintained during the entire pandemic, with British Airways operating services to London Heathrow. This proved essential for cargo, post, business traffic, medical needs and students.”

He recalled that the number of planned summer weekly flights for 2020 was 40 per week, including EasyJet’s Edinburgh route, eventually postponed from 31 March 2020 until 5 June 2021.

In the midst of the pandemic,the government secured a re-start of London Luton services, on this occasion operated by a new carrier to Gibraltar, Wizz Air, “the fastest growing airline in Europe”. 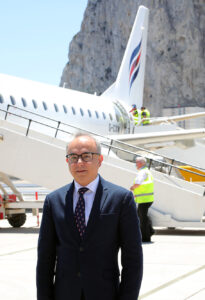 Even though the UK imposed a lockdown during the early part of 2021, vital links to the UK were maintained, with British Airways operating to London Heathrow and EasyJet continuing operations to London Gatwick.

With the lifting of restrictions on travel from the UK on 17 May, said Vijay Daryanani, “recovery is starting to show”. London Luton services by Wizz Air were re-launched on that same date, and both EasyJet and British Airways added additional flights to meet demand in May, from London Heathrow, London Gatwick, Manchester and Bristol.

“From June, Gibraltar Airport saw more links to the UK than ever before, including its first link to Scotland. It has also seen an additional two new airlines operating services, Eastern Airways and BA CityFlyer.”

EasyJet plans to operate twice-weekly services to Edinburgh (on Tuesdays and Saturdays) until the end of October, and BA CityFlyer started operations to London City Airport on 11 June, “two weeks earlier than originally announced, to meet customer demand”. Flights are scheduled to operate twice a week on Mondays and Fridays until the end of September.

Another new airline, Eastern Airways, is operating from two UK regional airports: “Southampton, the first time this airport has been served from Gibraltar, and Birmingham, bringing back this popular link to the Midlands that was last operated by Monarch Airlines in 2017”.

Both routes are operating twice weekly and the initial plan, according to the minister, is to operate all year round, “also attracting tourism to Gibraltar away from the summer months and providing leisure opportunities for Gibraltar’s population, as well as a vital link for Gibraltar’s student population studying at or near these cities”.

Photos: Minister Vijay Daryanani was among the authorities present for Eastern Airways’ inaugural flight from Southampton.