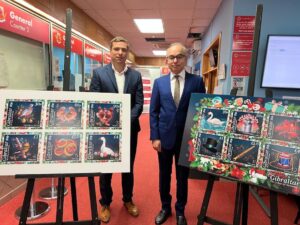 The first set of stamps in the world featuring His Majesty’s Royal Cypher has been issued by the Gibraltar Government and Gibraltar Philatelic Bureau.

Titled “The 12 Days of Christmas”, the set covers postage values used in Gibraltar for postal operations throughout the Christmas period. It depicts all the gifts that are part of the English carol of the same name, which dates to the late 18th century, and the stamps have been designed by local graphics artist Stephen Perera and printed on high-quality gummed paper.

Collectors can purchase the stamps from the Philatelic Shop (104 Main Street) or online via www.gibraltar-stamps.com, while Christmas mail, parcels and postcards can be sent from the Royal Gibraltar Post Office counters or online at www.post.gi.

“We are honoured and proud to become the first country to issue a set of stamps with His Majesty’s Royal Cypher,” said minister for postal services Vijay Daryanani. “We all know what the royal family means to Gibraltar. Although we will never forget Her Majesty we will now show the same affection to King Charles, King of Gibraltar.”

Added chief minister Fabian Picardo, “Gibraltar will be the first of His Majesty’s realms to send his image around the world on our mail. I am delighted at this demonstration of our loyalty to His Majesty and the Crown.” 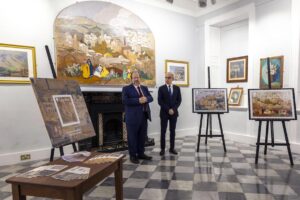 A special set of stamps has also been launched to mark the 150th anniversary of the birth of Gibraltar-born artist Gustavo Bacarisas. Initiated by Gibraltar Cultural Services on behalf of the ministry for culture and Gibraltar Philatelic Bureau, the launch is part of the celebrations paying tribute to the artist’s work and legacy.

The set features some of his artworks, which are on show at the Mario Finlayson National Art Gallery and City Hall and have a specific link to Gibraltar.

The launch of the stamps had been planned for the artist’s actual birth date (23 September) but was postponed due to the passing of Her Majesty Queen Elizabeth. As the stamps depict the former monarch’s profile, authorisation was required from Buckingham Palace for release.

According to the Gibraltar Philatelic Bureau, this set of Gibraltar stamps will be the last to feature Queen Elizabeth’s profile.

They are available for purchase online at www.gibraltar-stamps.com, and from the Philatelic Shop and National Art Gallery gift shop at City Hall. 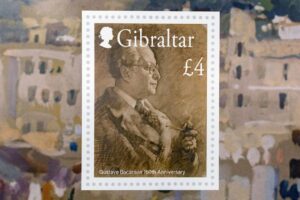 Born on 23 September 1872, Gustavo Bacarisas was the first-ever recipient of the Freedom of the City of Gibraltar in 1962 and one of Gibraltar’s most prolific international artists. His successful career spanned more than 70 years, across three different continents.

During the week of his birth date, minister for culture John Cortes officially opened newly refurbished exhibition rooms at the Mario Finlayson National Gallery, with new works from the artist and additional art from heritage artists also on show. The gallery refurbishment comprised several additions and improvements, including QR codes for audio and written information provided online for a more inclusive experience.

Gibraltar Tourist Board has been nominated as a finalist in the 2022 Travel Bulletin Star Awards in the “Star Cultural Tourism Destination” category.