Inauguration of Pillars of Hercules Gallery in Gibraltar

A new gallery has been inaugurated at Gibraltar National Museum dedicated to the Pillars of Hercules.

In a press release announcing the official opening, which coincided with Museum Open Day, the Gibraltar government noted that the Pillars were “a significant geographical marker in classical times, signifying the end of the known world”.

The northern Pillar (Calpe Mons) is today known as the Rock of Gibraltar, but there remains historical disagreement about the southern Pillar (Abila Mons) – possibly Monte Hacho in Ceuta or Jebel Musa in Morocco. 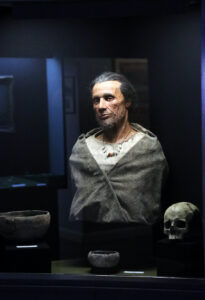 Spanning approximately 8,000 years, the gallery starts with the earliest arrivals from the eastern Mediterranean area in the Neolithic era (7,400 years ago) and ends with Roman artefacts from the fifth century CE. “During this long period, people from diverse locations arrived at Gibraltar, exemplified by the wide diversity of artefacts of very wide provenance, particularly from the eastern Mediterranean. Artefacts include Egyptian, Phoenician, Greek, Carthaginian and Roman. Locally made artefacts from south-western Iberia, notably Tartessos, are also represented.”

Artefacts on display include scarabs, beads, amulets and ceramics from Gorham’s Cave, Roman amphorae and lead anchor stocks retrieved from the seabed, and lamps and fishing equipment. According to the government, the most striking items on display include reconstructions of the Neolithic “Calpeia” and the Bronze Age “Yantar”, the latter on display for the first time. Another first is a display of the remains of the Gorgon Medusa’s ceramic plaque (Gorgoneion), as well as a full reconstruction. 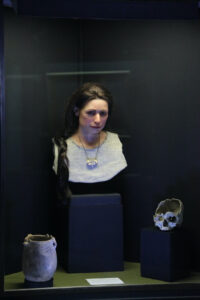 “This is the most comprehensive display of artefacts, representing the Pillars, ever to have been brought together in the Gibraltar National Museum,” said minister for heritage John Cortes. “I am delighted to declare this groundbreaking gallery officially open during a unique and exciting Museum Open Day.”