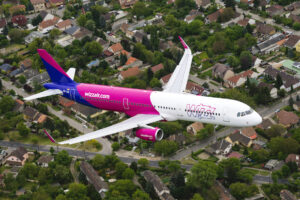 Flights by Wizz Air from London Luton to Gibraltar have been resumed. The twice-weekly service had been suspended in August but now the Hungarian low-cost airline has included Gibraltar in its upgraded schedule for September.

Announcing the resumption, Wizz Air UK managing director Marion Geoffroy said, “We are excited to be restarting more routes from our London Luton base, offering customers even more options when deciding on their next trip away.

“Whether it’s a last-minute weekend away to Gibraltar in September, a family getaway to Fuerteventura in October half-term, or a winter city break to Vienna in November, passengers can rely on Wizz Air’s great value options for their holiday later in the year. We look forward to welcoming back customers to experience our exceptional service on board our new, green Airbus aircraft.”

Meanwhile, Gibraltarians were able to enjoy a series of celebratory gatherings and festivities in popular areas around Gibraltar as they commemorated National Day yesterday. Restrictions were still in place due to ongoing COVID-19 concerns, but the celebrations were not as subdued and low-key as in 2020, when the global situation was considerably more precarious and most of the local population had not been vaccinated.

In his annual message on the eve of National Day, chief minister Fabian Picardo said, “I have received, through His Excellency the Governor, the congratulations and best wishes of Her Majesty the Queen. Her Majesty notes that 2021 has been a difficult year and tells us all that she hopes we may look forward to overcoming the global health challenges and to better times in the future.

“This year, we once again have to meet virtually and by video link. But next year I have no doubt we will be back at Casemates, the home of National Day… I ask you all to remember this year the 97 who we have lost to COVID – 97 who were with us this time last year and who we lost to the pandemic despite our best efforts based on the best medical advice available. And despite the sacrifices and inconveniences we have all endured to try to slow the spread of the disease in our community. We will never forget those we lost. I will never forget them.

“And it is with the humility inflicted on all of us by COVID that we have to face the realities of the challenges to come. I am humble in pledging myself to work as hard as possible this coming year to ensure we emerge stronger from the treaty negotiations and from the pandemic. But I am inspired by our great Rock and the many great Gibraltarians around me. In every field, from the arts to sports, Gibraltarians break through, internationally, all the time. And these are the inspiration for so many of us and for our future generations. So many generations of Gibraltarians punching above our weight and doing more and going further by dint of commitment and sheer hard work.”

Picardo was joined by governor Sir David Steel and UK minister for European neighbourhood and the Americas at the Foreign, Commonwealth & Development Office Wendy Morton as he visited celebrating Gibraltarians.

According to a GBC News report, the day began with the release of a short-toed eagle, named Jebel Tarik, in honour of the occasion, by the GONHS Raptor Unit at the Queen’s Balcony in the Upper Rock Nature Reserve.

National Day every 10 September is a celebration of Gibraltar’s first referendum in 1967, which asked Gibraltarians if they wanted to remain under British sovereignty or revert to Spain. More than 99 per cent of voters chose the former, and Spanish dictator General Franco subsequently ordered the border gate to be closed two years later. It was partially reopened for pedestrians in 1982, and vehicle traffic was allowed in 1985.